Callaway Big Bertha B21 Irons Review: Are They Worth Buying?

Our Callaway Big Bertha B21 irons review unpacks everything you need to know about these amazing clubs. We’ll look at the design, feel, performance, and value these clubs can add to your golf game.

By Casey WadeJanuary 6, 202310 Mins Read
Callaway Big Bertha B21 Irons Review: Are They Worth Buying?

Are you looking for a set of chunky irons with plenty of offset and a thick top edge? The Callaway Big Bertha B21 Irons set brings you everything you need for higher ball speeds, less spin, and better control. The Big Bertha B21 irons set is the first iron set from Callaway to sport its revolutionary “Flash Face” technology in the design of the club face cup.

As a result, you can expect the Big Bertha range to deliver the best launch and elevation, along with straight, true shots that go where you want them to, inspiring confidence in your game. Callaway also introduces its A.I design in the Big Bertha set, giving you precision-engineered weapons for the golf course.

Our Callaway Big Bertha B21 irons review unpacks everything you need to know about these amazing clubs. We’ll look at the design, feel, performance, and value these clubs can add to your golf game.

Take a look, we think these clubs have great looks and styling…

The Callaway Big Bertha B21 irons offer you some of the best entry-level clubs available. You get the best distance, impressive launch, and elevation, with a comfortable feel and just the right amount of feedback in the shaft.

The B21 series in the Big Bertha range is the premier collection for beginner golfers looking for the best clubs money can buy. The B21s feature the revolutionary new A.I-designed “Flash Face Cup,” giving each club in the set a complex, unique face architecture.

The result is amazing ball speeds and better spin consistency in your shots for precise placement where you want the ball to go. The Flash Face integrates into the 360 Face Cup, delivering superior face-flexion during contact with the ball and impressive increases to ball speed.

The Callaway Big Bertha B21 irons also feature a tungsten energy-core weighting system. The design places the center of gravity deep in the club head, producing an outstanding launch in your shots while maintaining ball speeds.

The Callaway Big Bertha B21 irons feature more offset and wider soles. As a result, the beginner finds they receive more confidence when they are over the ball. At the same time, you get improved turf interaction, straighter ball flight, and less spin.

Callaway brings its proprietary urethane microsphere technology into the design of the Big Bertha B21 iron range. You get outstanding shock absorption and better feedback through the shaft, and fantastic acoustics when you make contact with the ball. 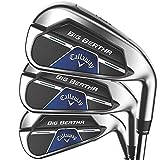 The Callaway Big Bertha B21 irons have a design for golfers looking to get more distance from their shots. By adding the tungsten weight to the rear cavity of the club head, Callaway achieves improved launch through shifting the center of gravity to a lower position and deeper into the club head.

As a result of having the weight further to the rear of the club head, along with the addition of the wider sole in the Callaway Big Bertha B21 irons, you get better confidence in your shots.

However, Callaway brings you one of the industry’s widest range of fitting options. You get over 100 aftermarket grips to choose from for your clubs and plenty of custom shafts. Callaway also accommodates customization of the lofts and lie angles in your Big Bertha B21 irons.

The Callaway Big Bertha B21 irons produce nearly identical ball spin and speed numbers to the MAVRIK range. That’s not surprising since both ranges utilize the new Callaway Flash Face Cup technology and use the new tungsten weighting system.

However, user reviews say the Big Bertha B21 irons tend to provide more lift and a higher launch than the MAVRIK range. So, if you have problems getting the ball into the air, these irons can really help you tighten up the holes in your game.

We think that the Big Bertha B21 irons are great for golfers that tend to do well with straight shots but struggle with slices. The offset on the B21 gives you more distance because you’re directing most of the shot’s energy forward.

With its high-launch and fast-face, the B21 is the ideal choice for recreational golfers looking for a forgiving set of high-performance irons. You’ll find that the Big Bertha B21 irons are high-flying wonders that will take your game to the next handicap.

These highly-playable irons get their user-friendly operation from the wide sole. The extra width means you get less digging into the turf and excellent performance when you need to get out of the rough or the sand. The B21 irons provide a straight, true flight path with a high trajectory.

So, if you struggle with distance and trajectory, these irons are a great choice. However, they lack the finer detail of other irons around the green. You might find them a bit clunky when you go to make those precision shots.

Suitable Handicaps for the Callaway Big Bertha B21 Irons

The Callaway Big Bertha B21 irons offer you plenty of forgiveness and a large clubhead profile that beginners will love. These clubs are ideal for players with an 18 to 20 handicap or higher and beginner golfers that want to get their game on track and ready for the course in the fastest time possible.

The Callaway Big Bertha B21 irons offer you a slightly better level of forgiveness to the MAVRIK MAX series and better distance and control. The deeper center of gravity, thanks to the positioning of the tungsten weight in the head, along with a slightly thicker profile, means better handling and performance for beginners.

If you find you’re hitting off-center more than you would like, the Callaway Big Bertha B21 irons are a great choice to give your ball a straighter flight path and keep you out of the rough.

The styling and finish of the Callaway Big Bertha B21 irons offer you an eye-pleasing and confidence-inspiring aesthetic, thanks to the oversized heads. That’s a feature that high handicappers will appreciate, and it’s guaranteed to fast-track beginner development from driving range to the course.

The edges of the Callaway Big Bertha B21 irons feature a tick top line that’s around the same thickness as the MAVRIK MAX, with a wider sole for better stability. Moving towards the longer irons, we find that the tungsten weighting is much more prominent in the club’s feel.

The substantial offset also becomes quite noticeable, but the head’s curvature conceals it. As for the final finishing touches, we think the badge design is impressive, adding a stylish fish to the club head.

The blue and contrasting dark grey colors are sure to be more appealing to the retail market than the orange in the MAVRIK, with the Callaway “Big Bertha” logo drawing your attention to the center.

The feel of the Callaway Big Bertha B21 irons will not suit advanced players of the game. The clubs are very forgiving for beginners, but advanced players will find that they don’t get enough feedback through their hands to get a good feel for the clubs.

The irons have a somewhat “clicky” sound on impact with the ball, similar to what you find in many of the TaylorMade GI irons. However, if you’re a beginner, you’ll find the feel and feedback fantastic. The irons feel strong in your hands, and you get minimal feedback, reducing shock in miss-hits.

Overall, you get a very explosive feel off the face when making contact with the ball. The impact extends through the toe and heel areas of the club, and making the perfect contact with the sweet spot produces an audibly-pleasing crisp ping.

The feedback is around the same with the Callaway Big Bertha B21 irons as with the MAVRIK series, which has a similar feel, but even less feedback. You’ll also find that your miss-hots sound very similar to strikes on the sweet spot. As a result, beginner golfers might take a while to discern the difference between the sounds.

Wrapping Up – The Verdict on the Callaway Big Bertha B21 Irons

Overall, we have to say that Callaway lives up to the hype with its Big Bertha B21 irons. The clubs perform just like Callaway say they will with a high launch, fast ball speeds off the club face, excellent carry along the fairway, and great stopping power on the green.

You get a stable feel throughout the shot, and you’ll, now when you make that perfect contact with the ball. We would recommend the Callaway Big Bertha B21 irons to any beginner looking for a set of irons that will last them until well into their intermediate phase in the sport.

The irons are a great choice for high handicappers looking to improve their game. When using these irons, you can expect more forgiveness and consistency across your gameplay. The stability through the impact zone and the sweety spot is excellent, and you get good stability with plenty of carry distance along the fairway.

Beginners need to move away from using their grandfather’s blades when learning the sport. A set of the Big Bertha B21 irons will help you fast-track your learning curve instead of struggling with that set of old blades.

The forgiveness of the Big Bertha B21 irons almost justifies the higher price tag over the previous MAVRIK range from Callaway. We would recommend them over the MAVRIK for those players that need maximum forgiveness and launch, mainly in the longer irons, or for players that struggle with open-face contact with the ball.

Overall, you can expect the Big Berth B21 irons to bring you a great golfing experience. They are the ideal set for beginners looking to get into the game and fast-track their familiarity with their irons.

Casey hails from Florida & is our resident product tester and head of reviews here at GolfMonster. Casey is a scratch golfer with 20+ years of golf knowledge behind him. You will him out on the courses of Sarasota.

How to Choose Golf Clubs for Your Height? Guide to Sizing Golf Clubs

Advertiser Disclosure:
Some links may be affiliate links. We may get paid if you buy something or take an action after clicking one of these

Are you tired of slicing your tee shots? Everyone else seems to get their ball…

How to Choose Golf Clubs for Your Height? Guide to Sizing Golf Clubs